It all started when D.Challener Roe decided to pay tribute on the fifth anniversary of the tragedy, to the 2,996 people who died heros on September 11, 2001. I asked specifically to honor someone that was killed in the attack on the Pentagon, since I live in the DC area, and I can recall the events of that day just as clearly as if it were yesterday. It's hard to live here and not know someone that works at the Pentagon - my best friend's dad, for example. He was safe, others were not.

The Washington Post was the only major newspaper that posted a photo of the smoldering Pentagon as front-page news on September 12, 2001, while the rest relegated it to page 2 and gave New York center stage. We also sacrificed, we also lost, and we remember. 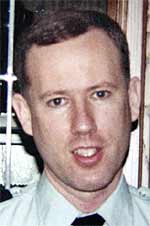 I'm honored to tell you about Lt. Col. Dennis M. Johnson, (this photo was found on the Arlington Cemetary Website). He was laid to rest in Section 64 of Arlington National Cemetery, "in the shadows of the Pentagon" where he gave his life and earned a Purple Heart.

Lt. Col. Johsnon was a Wisconsin boy, born on April Fools Day in 1953 and raised in Port Edwards. He graduated from the University of Wisconsin-Stevens Point (Go "Pointers"!), and served in the Army tank division before being assigned to the Pentagon. One assignment saw him visiting the homes of families who had lost someone in the service of our country. It was an important job that he took very seriously.

Lt. Col. Johnson had a wife named Joyce, and two girls - Cassandra Lee and Dawn Marie. Joyce posted a tribute to her husband online that read: "The love of my life, my heart and soul. Is missed so much. May you be at Peace." He was also remembered him in his epitaph as a "Beloved Husband and Devoted Father."

If you have a 2,996 post on your blog, please tell me in comments so I can make sure to visit your tribute.

I'm in tears as I visit each tribute!

You did an awesome job. So many wonderful people the world lost that awful day!

my tribute is up too, as you know. Thanks for visiting.

Thank you for honouring Dennis.

I will be posting my tribute tomorrow.

Thanks for remembering and caring about the people I worked beside for so many years.

Thank you for writing this stirring tribute to a soldier defending his country.

Please stop by to my tribute post for Gilbert and leave a link and comment so that others can come here to read.

Wonderful tribute for a wonderful man. Thank you.

My tribute to Keiichiro is up as well. Wonderful tribute... and while I don't live in DC- or anywhere close- I am in a military family and the Pentagon's attack touched us deeply... Wonderful tribute, thank you for sharing Lt. Col. Johnson with us.

Very nice tribute - every since I saw Alan J. sing that song for the first time at the awards show, I get goose bumps & tear up.

My tribute is up also.

That was a really beautiful tribute! You can feel pain in his wife's words. Thanks for stopping by my tribute to Marjorie C. Salamone.

This is a wonderful tribute. You're right, many people seem to have put the Pentagon below the WTC. My dad used to have to go up and work in the Pentagon when he was stationed at Quantico, VA, so this was very close to my heart.

My tribute is up today, too.

What a wonderful tribute honoring Dennis' life. It was obvious his wife loved him dearly. He is missed but won't be forgotten.

I also participated in this & I have it posted. http://growing-up-by-faith.blogspot.com

Thank you for letting us get to know about him. Please come to my blog to read the tribute to Mr.Nelson.

Yes, thank you for helping him to live on in our collective memories.

You've already been to my blog to read my tribute to Ruth McCourt, thank you for your kind comments.

What a wonderful tribute to a great man.

Lt. Dennis Johnson, you are remembered with your purple heart and tribute here and from all those who read.

I have remembered two
Stephen Patrick Cherry and

Michael Francis Lynch
who perished in the WTC.

How sweet that you would take your time to remember Lt. Col. Dennis M. Johnson. I know that his wife and children would really appreciate your tribute!

My tribute to Yin Ping Wong is up.

It was on your page that I first read about this tribute, so thank you for alerting me to it.

A beautiful tribute. All the families and friends of the ones lost are in my thoughts today.

I have a tribute up at my site also.

Carmen, thanks to your wonderful post, I will never forget Lt. Col. Dennis Johnson. Or his wife, Joyve, and their two daughters.

This is so sad that so many people lost their lives on this day. I still remember that day at school and all of us where sitting around the tv. Australia is so far and we all felt so helpless that we couldnt help.

What a touching tribute...it brought tears to my eyes. I will never forget that sad day or the victims & their families.

My tribute is up.

That was a very nice tribute to Lt. Col. Johnson.

I think we all learned something through this exercise, although I share your thoughts about the lack of coverage of the Pentagon attack.

Perhaps because it is a military facility, or merely because of the scope of the attack on New York; but one does have to dig to find info on the Pentagon.

Thanks for letting me in on this worthwhile project. I don't think I would have known about it if I hadn't read it on your blog.

What a fantastic tribute to a man dedicated to our country. I am sure his family and friends will be honored by your words on this day.

What a very nice tribute to Lt. Col. Johnson. The lyrics from the Alan Jackson song were perfect.

The tears have already been flowing this morning, as I have the Ground Zero Tribute on the TV this morning.

Thank you so much for being a part of this wonderful project. As a veteran, Mr. Johnson was one of America's heroes but died needlessly that terrible day.

Wonderful Tribute!
Thank you.
These are sad and hard to read....
I am honored to be a part of this project.
Mine is posted also...
The ultimate measure of a man is not where he stands in moments of comfort,
but where he stands at times of challenge
and controversy. ~Martin Luther King, Jr.

Beautiful Tribute. I wondered if you were in D.C. in 01.

OldLady Of The Hills said...

The sadness that one can "feel" today is softened only by these loving tributes....

What a wonderful post - I have made it my mission to read every single one of these.....they were all people - not just names on a list.

While NY gets most of the press - there were victims in DC and PA too....we should never forget


Mine is up too - remembering Edward Raymond Vanacore

Thank you for your introduction to Lt. Col. Johnson. I liked knowing he was born on April Fool's, wondering if that gave him any trouble growing up. I am sad that he left behind a wife and daughters. God give them peace.

We must remember, all of them. We must never forget, any of them.

So sad that this family lost their father. Jus so senseless and terrible.

I cried everytime I heard that song, when it came out! You did an amazing and beautiful tribute, Carmen. I won't forget Lt. Col. Johnson.
My tribute is up in remembrance of Naomi Leah Solomon.

Thank you for writing this tribute to Dennis and for helping us learn more about his life and work. My heart goes out to his wife and daughters on this terrible day.

That every name, every face, every soul, every heartbeat should be made one. In the face of the tragedy we all lived through, it is the only prayer I have. Your tribute brings one more name, one more face, one more soul, one more heartbeat into the circle, and we keep living, not inspite of 9/11, but because of those who gave all.

Thank you for your piece of the puzzle.

I feel so sad for his family! Thanks for letting us know about him...

My tribute is to Captain Victor Saracini...

Thank you for sharing Lt. Col Johnson with us and reminding us that there were more victims in addition to those in New York city.

Thank you for your kind words about Lt. Col. Johnson and thanks for stopping by to read my tribute.

I remember now, too, thank you.

Yours is the first tribute I've read to someone who died at the Pentagon, just 20 miles from my home. Thank you, and thank you for visiting my tribute.

That was wonderful and touching. My tribute is up and I hope to do a better job each year. I really wish I knew more about VIncent Litto so that it could have been more personal. When you visited were you able to hear the music?

bless you
and all the families for whom this is a very hard day. I am proud to know so many took the time to write beautiful tributes. AND proud of DALE ROE also!

I have to admit much of my focus 5 years ago was on NY. But, there were 4 planes that day. My tribute was to one of the passengers on flight 77. You wrote a really great tribute to, what sounds like, a lovely man. Thank you.

Awesome post, Carmen. I hope his family finds peace in this rememberance, somehow!

Thank you for your beautiful tribute of LTC Johnson.

Mine is up. What a great tribute, I haven't forgotten the Pentagon. Thanks for helping us all remember.

Thank you for sharing Dennis' story. My thoughts and prayers go out to those he left behind. Rest in peace, Dennis.

Thanks also for visiting my tribute to Judson Cavalier.

A wonderful tribute of Lt Col Johnson. Thank you for taking the time to do this tribute on an American Hero.

The 2,996 Tribute projects is such a great idea to remember those who lost their lives, that they won’t be forgotten. That was a horrible day and tragic event. I did a tribute to Chief Battalion William J. McGovern, firefighter.

Thank you for stopping by my tribute to Paul Robert Eckna at thecleaningwoman. I also have a tribute to Denis F. Lavelle at health-psych.

Wonderful tribute. Thanks for participating

An absolutely beautiful tribute. Thanks for participating in this wonderful but sad event.

You did a wonderful job with your tribute, Carmen.

Thank you for sharing your beautiful words.

Very nice trbute, thank you for sharing it with us

My tribute to Saranya Srinuan can be found at http://retardedrugrat.wordpress.com

Thank you, it was very nice and the first one that I've read about one of the many heroes from the from the Pentagon.

Now that I've written my own tribute, I'm 'meeting' the other victims. You did a wonderful job, Carmen.

You're decision to choose the Pentagon was a good one and you've written a beautiful tribute. I'm getting through them a little bit at a time as I've returned to work full-time. It is very striking to me so far just how much each of these persons touched other lives. I suppose we all do but these all really stand out. Thanks for participating. I remembered Jane Eileen Josiah.